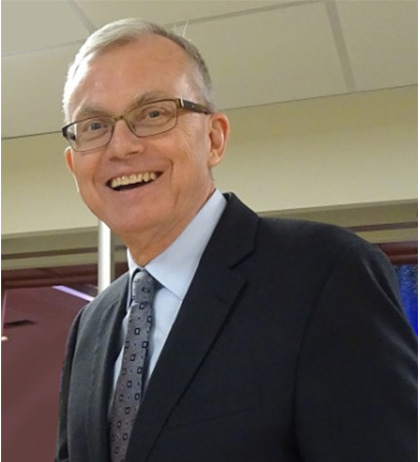 Lloyd Eyre was born in Brockville, Ontario, the son of the Rev. Donald Eyre and Alice Wisner Eyre. Following his graduation from Centennial Secondary School in Belleville, Ontario (1974) he obtained a BA from Roberts Wesleyan College, Rochester, NY (1977) and a Master of Divinity from Asbury Seminary, Wilmore, Kentucky (1981). He has completed additional graduate studies at Wycliffe College, University of Toronto and Trinity Evangelical Divinity School, Chicago.

In 1981, he was appointed Pastor of the Parkview Free Methodist Church, Renfrew, Ontario, and served for three years. In 1984 he accepted a call to Pastor the Peterborough Free Methodist Church, and served for 31 years, to January 2016. While there he also became President of the Lorne Park Foundation in 1998 and, as President, serves as Chair of the Wesley Studies Committee at Tyndale Seminary.

Lloyd and his wife, Karen, live in Peterborough. They have two children, and four grandchildren.

Adrian Collins has served on the Lorne Park Foundation Board since 2014, and was elected Board Chair in 2018. Adrian is an ordained minister with the Free Methodist Church in Canada. From 2010 to 2021, he served as Pastor of the St. Joseph Island Free Methodist Church. He continues to serve the denomination as Regional Coach for Western Ontario. Prior to his career change into pastoral ministry he was the Chief Financial Officer for MICA Management Resources, a Canadian consulting firm in Toronto specializing in leadership development, education and training.

Adrian has an MBA degree from Heriot Watt University in Scotland and a Master of Divinity degree from Tyndale Seminary in Toronto. In 2010 he received from the Lorne Park Foundation its Mary Bass Award for academic excellence in his Masters program.

Adrian and his wife, Cindy, have two children and five grandchildren.

Do you want to partner with Lorne Park Foundation to provide financial assistance to students entering full-time Christian service?

Help Lorne Park educate the next generation of leaders.

Give Online
Make a Special Gift

Provide us your contact information and our office will be in touch soon.

It's a very simple, convenient way to give.